iPad - almost, but not quite 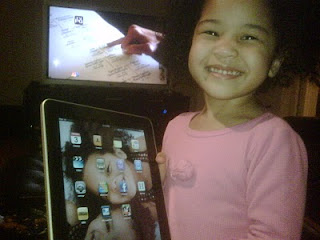 I carry around a folder and a paper notebook at work as I shuttle between meetings.  I find that embarrassing since this is the 21st century, I'm a technologist and I work at a technology company yet still rely on a very old school way of taking notes.  I would love a device that let's me write notes naturally (I don't need handwriting recognition) and have them easily accessible with the rest of my electronic information.

I've thought of carrying a laptop computer around but typing notes during a meeting can be very distracting and come across like you're not paying attention and doing other work.  Yes there are tablet PCs but these are too bulky, take too long to start up and generally overserve the job.  I've considered a digital pen like Livescribe but that would still require me to carry a laptop with me to see old notes.

Even though I know the iPad wouldn't solve the note taking job, I still felt compelled to purchase one last weekend to see how close it came.  As we've come to expect from Apple, it is an amazing device.  It is a giant iPod Touch (which is a good thing since the iPod Touch is a fantastic product and this is simply more of a good thing!).  Maybe the best thing is the long battery life - much longer than the iPod Touch.  It's great for web browsing (I so far haven't missed the lack of Flash support and loved watching video clips on msnbc).  I love playing Scrabble on the iPhone and it's even better on the iPad.  I'm really looking forward to watching football on it next season.

The biggest flaw so far?  Within minutes of sharing the device with my wife and kids, it was completely covered in smudges and quite gross to look at when turned off.  Other problems: I was disappointed that the requirement for a high-powered USB port meant my PC couldn't charge the iPad while it was being synced.  Also disappointing is that iPhone apps are rendered in  a small iPhone emulator window (I guess that's how they would have to work but still, I wasn't expecting that).  Typing on the iPad is pretty underwhelming (although that's not a surprise).

But how does it stack up as a note taking device?  Well it has a lot of great things going for it with its light weight and big screen.  But it's not quite right for the job.  Here's a list of enhancements that would make it perfect:


I've also thought how a device like this would be great for school.  Students would no longer have to lug heavy backpacks around.  All their text books would be on the device and BTW, textbooks would no longer cost $300+, perhaps around $40 since authors would get a bigger slice of revenue.  Add a few more capabilities to record audio notes and cross-reference them with handwritten notes and textbook sections, this device would be an educational game changer!
So Apple, please get working on these requirements.  Otherwise someone like HP will beat you to it!