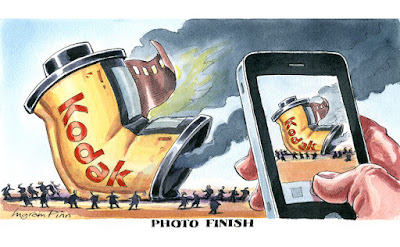 Perhaps you’ve read this article about Steven Sasson, an Eastman Kodak engineer who invented the digital camera in 1975.  Kodak, which at the time commanded 90% of film sales and 85% of camera sales, had no interest in developing digital cameras.  Of course digital photography eventually disrupted Kodak’s business and the company filed for bankruptcy in 2012.
Many will read this story and criticize the foolish Kodak executives for their short-term thinking.  The lesson learned on innovation is that if you’re going to be disrupted, isn’t it better to disrupt yourselves?
Well I would argue that the state of innovation at Kodak in 1975 was much better than 99% of companies today.  At least they had a digital camera project!  Take a moment to think about it – how many companies can say they are incubating projects that have the potential in 15 or more years to completely replace their current businesses?
Yes Kodak blew it by not placing a few chips on building a digital photography business but at least the patents they developed earned them billions of dollars after their film business began to wane.
So ask yourself – what is your company’s digital camera project?  And if you have one, are you committed to nurturing it for the long term?