This article was first published on LinkedIn.

In organizations, one of the most common complaints you’ll hear about is decision making. These include some variants of decisions taking too long to be made, poor decisions being made, or the right people not being consulted. Ironically, because we are all intimately involved in decision-making processes (as drivers of decisions or stakeholders), we all play a part in the problem we're complaining about!

So how can we shift from just complaining about poor decision making to doing something about it? A great framework to learn and use in your work life is Decision Making Modes. 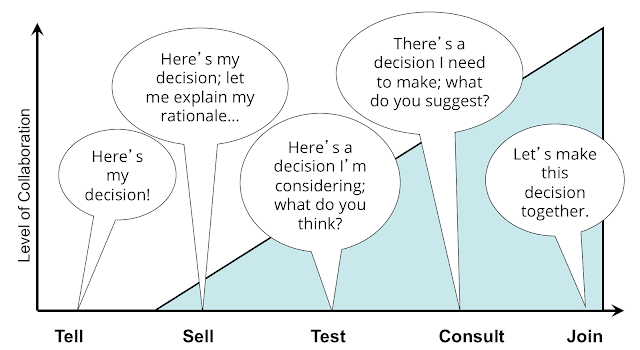 The five decision modes are: Tell, Sell, Test, Consult, and Join. As illustrated in the diagram above, the level of collaboration between the decision driver and her stakeholders increases as you move from left to right.

One immediate benefit for a decision driver is to be self-aware of which decision making mode she is using and whether that is appropriate for the situation. Some thoughts to consider:
Decision Making Modes also provide guidance for how stakeholders should engage with the decision driver: 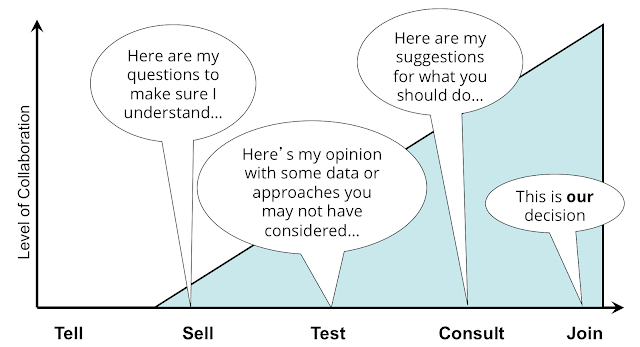 One common source of friction during decision making is when decision drivers and stakeholders are not in synch on the decision mode. If you are a stakeholder, you can ask the driver this clarifying question: "What decision mode are you in?"

Unless you intentionally want to hold up the process, your cooperation is demonstrated by responding appropriately to the decision mode. For example, don't advocate for an alternative when the driver is selling a decision. Almost all of us at some point have been guilty of contributing to a poor decision-making process by being uncooperative stakeholders!

Decision drivers should use the Decision Life Cycle when making a decision by first consulting stakeholders, then testing their proposed decision, and finally, selling their decision. 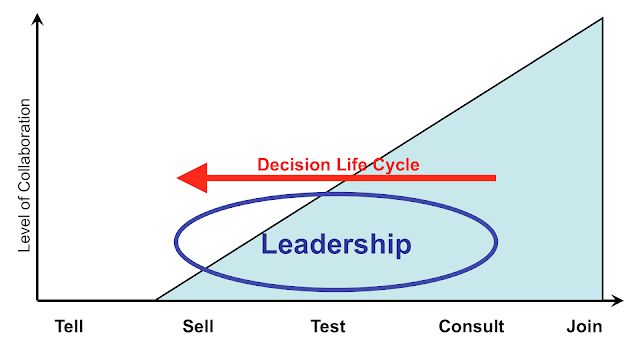 By consulting, you'll be equipped with a wide range of alternatives to consider. By testing your proposed decision, you won't be blindsided later by significant pushback or considerations you may have missed. Your ability to sell the decision will be greatly enhanced when you directly address concerns you heard when you were testing.

Even after a decision has been made and communicated, it is a best practice to let your stakeholders know that you are open to revisiting the decision if new information comes to light that warrants consideration. Indeed, with time, situations change and new data can be discovered. It actually requires strong leadership to change important decisions.

In conclusion, applying Decision Making Modes in your organization can go a long way in addressing common decision making problems by providing an engagement framework for drivers of decisions and their stakeholders.